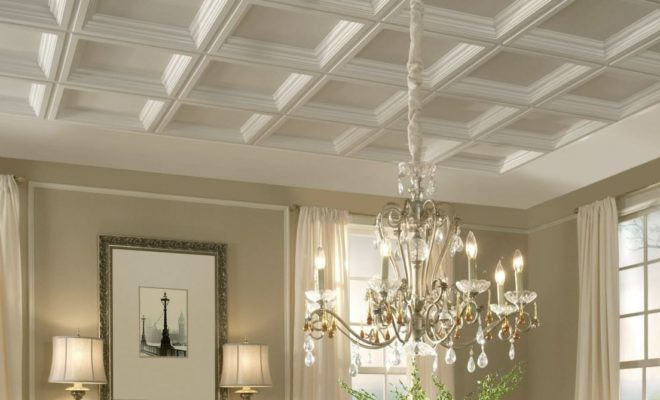 What is a Ceiling?

A ceiling is an interior surface that extends above the upper limits of a room. It is not a structural element, but rather a finished surface that conceals the underside of the roof structure or the floor of a story above.

Ceilings can be decorated to one’s liking, and there are many beautiful examples of frescoes and artwork on ceilings, particularly in religious buildings. A ceiling can also be thought of as the upper limit of a tunnel.

Dropped ceilings, which are suspended from structural elements above, are the most common type of ceiling. Panels of drywall are attached to the ceiling joists directly or to a few layers of moisture-proof plywood, which are then attached to the joists.

Pipework or ducts can be run through the space above the ceiling, and insulation and fireproofing material can be installed. Ceilings can also be spray painted, leaving the pipework and ducts exposed but painted, and utilizing spray foam.

The suspended ceiling is a subset of the dropped ceiling, consisting of a network of aluminum struts attached to the joists rather than drywall, forming a series of rectangular spaces. Individual pieces of cardboard are then placed in the bottom of those spaces, so that the outer side of the cardboard, interspersed with aluminum rails, is visible from below as the ceiling.

Because all that is required to repair the pipes and insulation behind the ceiling is to lift off the cardboard, rather than digging through the drywall and then replacing it, the repair is relatively simple.

Cathedral ceilings, concave or barrel-shaped ceilings, stretched ceilings, and coffered ceilings are examples of other types of ceilings. Coving is frequently used to connect the ceiling to the surrounding walls. Ceilings can help to reduce fire hazards, and a system for rating the fire resistance of dropped ceilings is available.

What are Different Types of Ceilings

Coffered ceilings, which are common in high-end homes, churches, libraries, and hotels, reflect a classic, even luxurious, aesthetic. Coffered ceilings are a more expensive option than standard options, and they must be installed by specialists who are familiar with this style.

Commercial wood coffered ceilings are easily identified by their grid of inverted panels accented by molding and are typically designed to work with standard T-Bar suspension grids, which helps to streamline the installation process.

Cathedral – or vaulted – ceilings are distinguished by their inverted V-shape, with the tip of the V being the highest point and the sides sloping down.

These high ceilings are constructed of a variety of materials. Linear wood is an excellent material to use, whether in planks or panels that are fastened continuously or progressively.

In most homes, a traditional ceiling construction type is used. These ceilings have a standard drywall finish and are made of less expensive materials, necessitating simple installation.

Despite being more easily accessible, a room can feel confining if the ceilings are too low. Raising the ceiling by a few feet can significantly increase space and even the resale value of a building.

However, upgrading conventional ceilings is more expensive because it necessitates the use of materials that are not standard fit. You’ll need to consider the cost, potential resale value, and how important aesthetic appeal is to you.

A suspended ceiling (also known as a dropped ceiling) is suspended from a metal grid beneath the existing ceiling.

These flat drop ceilings, which are commonly used with noise-reducing acoustic ceiling tiles, allow designers to conceal mechanical, electrical, plumbing, and lighting fixtures (MEP) above the dropped, exposed ceiling, such as pipes and wiring.

Suspended ceilings are most commonly used in commercial buildings, offices, and retail spaces because they provide designers with a great deal of flexibility. The majority of wood ceilings are suspended using standard commercial T-bar grids and are a low-cost option.

Shed ceilings, also known as single-slope ceilings, are commonly found on the top story of a home, either in the attic or loft.

A shed ceiling will begin at a high point on one wall and slope down toward the opposite wall, creating a distinct look for your room.

The shed ceiling structure in commercial architecture is similar to the shed roof structure. It also provides a lot of freedom to designers. If the main runners are positioned down the slope, wood ceilings can be suspended on a slope using a standard suspension grid.

Tray ceilings are multi-level ceilings that begin at one height and gradually decrease as more levels are added. The ceiling design is reminiscent of a tray, as the name implies.

The tray’s flat ceiling surrounds the raised center, which is the highest part of the ceiling.

Tray ceilings (also known as panned ceilings) lower slightly with each additional step or “level” that surrounds the raised center, creating a three-dimensional effect as the ceiling expands outwards.

These ceilings can add a dramatic effect to a room while also making it appear taller. Panned ceilings are typically two to three levels high, with each level dropping 5 to 11 inches below the level above. In between the layers, you can add trim or molding as a fascia.

Cove ceilings are common in formal rooms, theaters, and churches. One of the most famous coved ceilings in the world can be found in the Vatican.

This concave ceiling, which has curved edges instead of sharp angles between the ceiling and walls, is often built using curved molding or framing and has a dome-like design. The coves extend from the top of the main wall to the ceiling.

The dome ceiling’s rounded appearance softens and gentlers a room. These ceilings can be used to separate rooms as well as beautify formal spaces.

Though it is considered a contemporary style, it is a traditional ceiling form. Beams, which are typically made of hardwoods or Douglas fir, add a classic, rustic look to homes.

What is Fire-resistance Rated Ceilings?

The dropped ceiling is the most common ceiling that contributes to fire-resistance ratings in commercial and residential construction. In the case of a dropped ceiling, the rating is achieved by the entire system, which includes both the structure above, from which the ceiling is suspended, which could be a concrete or wood floor, as well as the suspension mechanism and, finally, the lowest membrane or dropped ceiling.

There is often some space between the structure from which the dropped ceiling is suspended and the dropped membrane, such as a T-bar ceiling or a layer of drywall, for mechanical and electrical piping, wiring, and ducting to run.

An independent ceiling, on the other hand, can be built in such a way that it has a stand-alone fire-resistance rating. In order to demonstrate that the resulting system is capable of supporting itself, such systems must be tested without the benefit of being suspended from a slab above.

This type of ceiling would be installed to keep items above it safe from fire.