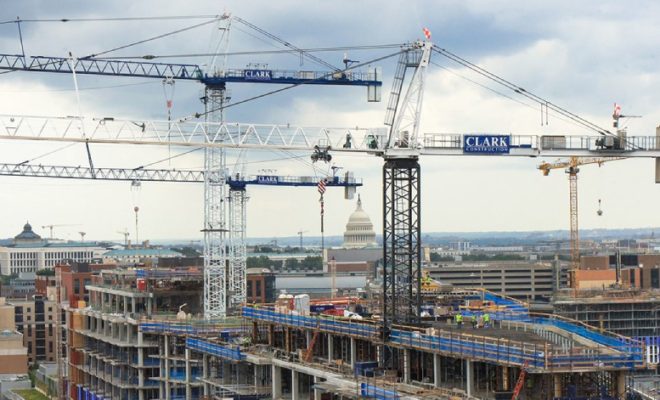 Clark Construction Group announced an expansion plan that will increase the company’s presence in the Mid-Atlantic region.

The plan includes opening a new 128,000 square-foot office in McLean, Virginia, doubling the size of its office space in Baltimore, Maryland, and maintaining an office in Bethesda, Maryland.

Clark is reinforcing its longstanding commitment to the region it has called home since its founding in 1906 with this office expansion.

Clark has completed over 1,000 projects that have improved the Mid-Atlantic region’s infrastructure over the last 117 years.

Clark has built some of the most sophisticated and complex projects in the region over the last two decades, including Nationals Park, the US Coast Guard Headquarters, the National Museum of African American History and Culture, the Inova Schar Center for Personalized Health, the University of Maryland Medical Center Capital Region Medical Center, Intercounty Connector Contract C, the new Howard County Circuit Courthouse, and Route 28 Corridor Improvements.

“Clark’s success for the past century has been deeply rooted in our commitment to creating an exceptional experience for our clients and our communities,” said Robby Moser, Clark’s chief executive officer.

“To continue serving the region and capitalize on the wealth of opportunities and talent that stretches from Baltimore to Richmond, a network of strategic locations is required. We are excited to expand our regional office footprint to meet the needs of our business, better serve our communities, and provide more opportunities for our team.”

Clark will open an office in McLean, Virginia, at 7900 Westpark Drive.

The new space is intended to serve as a modern and collaborative hub for Clark’s infrastructure, building, and asset solutions teams, as well as many of the company’s corporate departments that serve projects across the country.

This new location joins the company’s other six offices in the Mid-Atlantic region.

“We have created an environment here in Fairfax County where companies like Clark see the value in investing and expanding,” said Fairfax County Board of Supervisors Chairman Jeffrey C. McKay.

“Clark Construction has been instrumental in the development of infrastructure in Fairfax County and the surrounding area. Their initiatives have aided in moving commuters faster and strengthening local businesses. We welcome them to Tysons and look forward to continuing our collaboration.”

Clark is currently preparing the McLean space for occupancy in the fall of 2022. Clark will have three offices in Virginia, including affiliate Shirley Contracting Company’s office in Lorton and Clark Water’s office in Sterling.

Clark is currently working on projects in Richmond and is in the process of opening an office in Central Virginia.

“Clark is an invaluable partner to the Commonwealth, and we congratulate them on a new regional expansion into McLean,” Virginia Governor Glenn Youngkin said.

“Their continued growth and success benefits the Commonwealth, and I thank them for their efforts in Virginia. Virginia can and will be a hub for new companies, growing businesses like Clark, and job opportunities.”

Clark is doubling its office space at Stadium Square in downtown Baltimore while maintaining approximately 29,000 square feet in Bethesda.

Clark’s other Maryland locations include affiliate C3M Power Systems’ office and Clark’s equipment yard in Prince George’s County, in addition to offices in Bethesda and Baltimore.

“Clark has been a great Maryland company for decades and is one of the nation’s largest and most respected builders and companies,” Maryland Governor Larry Hogan said.

“We are pleased to see the company expand its presence in the Mid-Atlantic region, particularly in both Baltimore and Prince George’s County.”