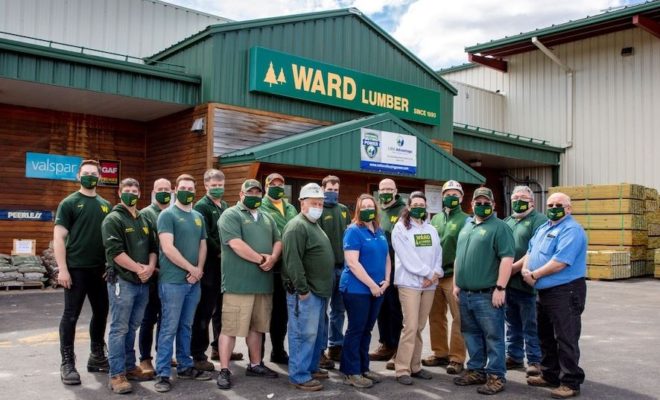 Ward Lumber employees have purchased the 130-year-old company as a worker-owned cooperative. The transaction represents the first employee ownership transition of its kind in New York’s North Country region.

Jay Ward’s family has owned the lumber and hardware store in Jay and Malone New York, for four generations and employs more than 50 locals.

Ward, who will continue to lead the company as CEO, has completed a contract with his employee team that makes Ward Lumber the region’s largest worker-owned cooperative.

“Every business is going to go through a transition, whether that is by design or default. Rather than choose liquidation or selling to some other business that would change the culture, I wanted to look at employee ownership. Employee ownership vests the control of the company in the hands of the people that work it every day, who live in the communities that we serve, and have that vested interest in ownership,” Ward stated.

“I really wanted to empower the employee team to make decisions on their behalf and for their benefit.”

“The main thing that’s changing is I’ll be reporting to a board of directors of our employee team,” Ward added.

He mentioned that they had been working on the transition process for more than three years.

Ward will continue to be heavily involved in the business’s operations for the foreseeable future.

Alex Pond, a board member who has been employed with the company for over six years, said, “This co-op is more than a change in ownership. It’s an opportunity to shape a future for Ward Lumber that is best for the business, our staff, and the community. It’s an amazing way for people like me to help carry Ward Lumber into the next generation.”

The senator met with local business owners and economic development leaders to promote the Main Street Employee Ownership Act, which Ward claims were critical in the company’s ownership transition.

“Ward Lumber’s successful transition is a great example of how we envisioned the Main Street Employee Ownership Act would work for businesses across the nation,” Gillibrand commented.

“Cooperative ownership models improve business productivity, increase wages and boost employee retirement savings. All this while creating greater stability and resilience for businesses, workers, and local communities. I applaud Jay Ward and the Ward Lumber team for securing their future through employee ownership, and ANCA for their good work supporting innovative economic development.”