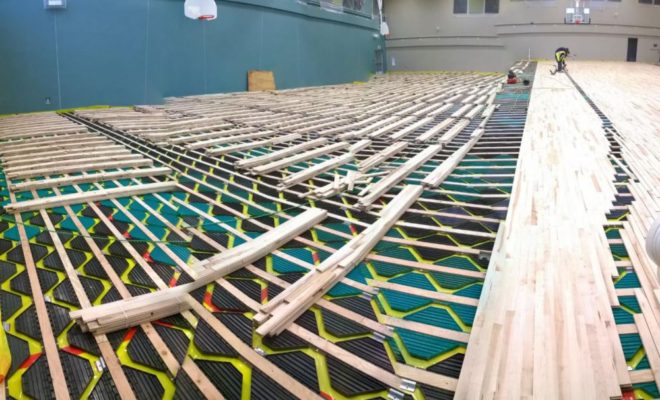 Connor Sports of Michigan will provide the official basketball courts for this year’s NCAA March Madness Final Four tournament for the 15th year in a row.

In addition to the Men’s and Women’s Final Fours, Connor Sports hosts the men’s and women’s Regional March Madness games, as well as the first and second rounds of the annual men’s tournament.

The annual cycle begins in late autumn, when maple trees in Michigan’s Upper Peninsula are felled and harvested. The maple is allowed to dry for months in order to achieve moisture levels of 6 to 9%.

In January, the wood is cut to the same width and thickness and quality-inspected.

It is then milled to ensure smoothness before being assembled into panels. Every panel is cut to the same size before being delivered to one of the company’s finishing partners for sanding, finishing, and graphics application.

The NCAA has a contract with the company until 2025.

Connor Sports has constructed maple hardwood courts for 12 NBA teams as well as hundreds of NCAA colleges and high schools.

It has created the most sports surfacing systems of any company. Every year, approximately 800 regular-sized basketball courts are built.

Connor Sports, founded in 1872, was the first to manufacture modular sport surfaces for outdoor and indoor athletics. Connor Sports employs 250 people and operates two manufacturing facilities in the United States.